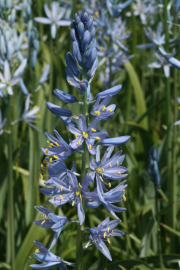 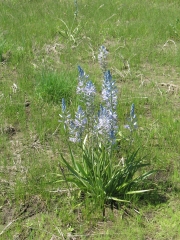 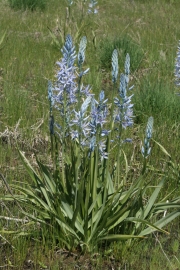 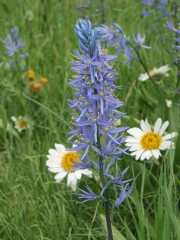 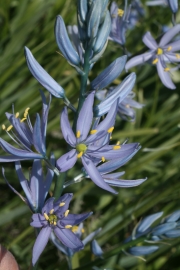 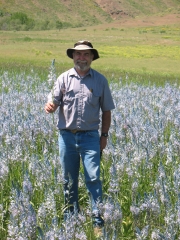 The Camas is a native plant that was used by the Native Americans (Blackfoots, Cree, Nez Pierce & others). The name quamash is from the Nez Perce �q�m�es� for the bulb, which was gathered and used as a food source by various tribes. It was considered to be a delicacy. The bulbs were steamed for pit-cooked slowly for a least a day, up to three, then ground up and mixed to make gravy. This plant is thought to have been semi-domesticated by the women to produce maximum harvest. Camas grows on moist swales and shallow marsh soils.

It is sometimes called "Black Camas" because when it is slow pit-cook, then the bulb turns black.

Camas provided an important food for the Lewis and Clark expedition. Although camas is edible, it may grow with death camas (Zigadenus spp) which has very different white flowers (picture on the left) and is extremely poisonous.