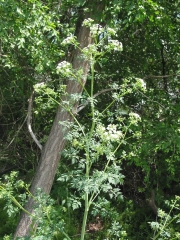 Poison hemlock is a biennial plant, which means it forms a rosette the first year and bolts upward to its mature height of 6 to 8 feet the second year. Poison hemlock is an introduced plant form Europe. It mostly grows along streams or ditch banks, and sometimes in an areas that retain a lot of soil moisture. Hemlock is part of the Apiaceae family that contains many poisonous plants that can be mistaken for edible plants. Apiaceae is the scientific reference to the Parsley family. Plant characteristics in the parsley family can be easily confused. For instance, when Poison hemlock is in it's rosette and younger second year stage it is easily mistaken for Carrots, and Parsnips. The poisonous property of poison hemlock is in the molecular structure of Alkaloids, which intern help build the animal (human) nervous system. In the mature stages poison hemlock can easily be recognized by examining the stem. The stem will be covered with distinct red spots, and have ridges running length wise of the stem.