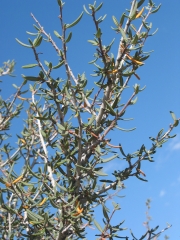 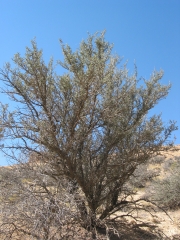 Curlleaf Mt. Mahogany (Cercocarpus ledifolius) is a shrub, with a woody aspect to the plant stock and branches. Ledifolius grows in very few different types of environments, which could be considered high plains deserts or the lower steppe of the mountainous forests. These environments are usually divided because of the understory perennial grasses, which are commonly Idaho fescue (Festuca idahoensis) or Blue bunch wheat grass (Agropyron spicatum). They are very much the same grasses but Festuca idahoensis grows in a more rocky mountainous environment and in a more clumpy/spotted growth pattern, while Agropyron spicatum is more known for high plains range lands and has a more condensed growth pattern.

Cercocarpus ledifolius is common to a rocky mountain steppe environment just below the tree zones. Ledifolius grows to be about 5 - 15 feet tall and is commonly seen among spotted Junipers (Juniperous occidentalis) and Ponderosa pine (Pinus ponderosa). Ledifolius is a major nutrient for deer and elk in the winter months. Studies have been done on the Ledifolius twigs, in order to determine whether it is regenerating for next years food source (Journal of Range Management 56(6) November 2003).

Carcocarpus ledifolius is an evergreen shrub of the Rosaceae family. The species Ledifolius is divided into two varieties which are easily mistaken for one another, due to the most identifiable leaf characteristic of this species. The best way to distinguish between the two varieties is to look at the leaf width; the first variety ledifolius has a blade 4 – 10 mm wide, while the variety intercedens has a blade mostly < 3 mm wide. Both varieties of Curlleaf Mt. Mahogany have a reddish – brown bark that with age turns grayish-brown and becomes furrowed with plate-like scales.