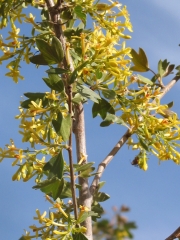 Golden currant is widely distributed throughout the northwest, and commonly found on the flood plains of streams or along ditch banks in the Snake River Plain. Shrubs of the Ribes genus mostly produce edible fruits, although some of them do not have a favorable taste. Golden currant produces orange berries with a sweet taste. The fruit were used as food and other parts of the plant as medicine. The berries were mixed with fish meat, pounded and used as a preservative.

Golden currant has the longest corolla tube in the currant family, making birds and insects probe deeper into the flower to get the nectar.